Trading Places at the Suoni: Vancouver-Lisbon-Montreal (Encounters of the Free Kind) 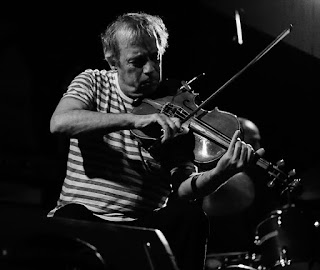 Cross-pollination in the arts is always a good thing. An example of this is when musicians from different geographical locations get together to share their experiences in a concert setting. This is especially exciting in improvised music, because you never know what might happen. Such was the case on two different nights at the Suoni per il popolo festival last week.
June 12 featured a Lisbon-Montreal encounter at the Casa del popolo, which was the first part of an evening devoted to daring improvisational music (the second part featured Norwegian bassist Ingebrigt Haker-Falten’s Texas band The Young Mothers). Heard three days later was the second installment of Trading Places, a collaboration between Montreal and Vancouver improvisers (which was followed by a solo set by drummer Will Guthrie). First instituted in 2016, this initiative allows two musicians from the Canadian West Coast to spend time in Montreal and play with locals during the festival’s run, including an informal workshop setting. In return two Montreal musicians travel West later in the year to engage in similar activities.
The June 12 Lisbon-Montreal encounter for its part was a concise set clocking in around the 45 minute mark. It paired the musical and life partners Karoline Leblanc on piano and drummer-percussionist Paulo J. Ferreira Lopes, with two of the latter’s Portuguese compatriots violist Ernesto Rodrigues, and guitarist Luis Lopes (no relation). As a unit, this quartet engaged in inspired and unscripted free-form improvisation.
The pianist’s flow of cascading chords and melodies was the thread that seemed to tie the music together, as Ferreira Lopes’ percussive washes seemed to ride in tandem with her energetic ideas. Guitarist Lopes, for his part, coaxed intriguing sounds and noises from his instrument, at times fingering the strings high up the neck, near the pickups, to get unusual harmonics and plucking effects, or scrapping a violin bow or a tin can across the strings. Violist Rodrigues wisely sawed away at his instrument, spinning a series of searing lines in this collective sketch that was at times jaw-dropping, the musicians feeding off each other in a sustained flow of inspiration. [...]  Paul Serralheiro (La Scena Musicale)