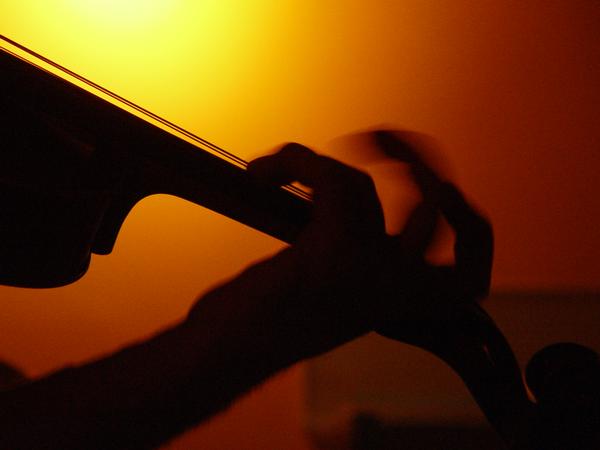 Leading-edge musicians have been releasing recordings of their own work for decades to overcome commercial labels’ resistance. Some have documented an individual artist’s work, while others, like Evan Parker’s psi and Gino Robair’s Rastascan, expanded to take in other artists. Few have grown at the rate of Creative Sources, the Lisbon label launched in 2001 by violinist/violist Ernesto Rodrigues, a producer as intrepid as Portuguese seafarers in the age of exploration. The label that began modestly enough documenting Rodrigues’ own work now includes artists from around the world and has just released the 178th title in its catalogue.

Rodrigues’ story of his musical coming of age is not an unusual one. First influenced by his father’s taste in music, Rodrigues had his first music lessons with the composer Wenceslau Pinto, godfather of his father. By his teens, in the ‘70s, he was playing with singers - José Afonso, Fausto and Jorge Palma - leading figures in Portugal’s increasingly political music.

Drawn to experimental forms, he moved rapidly through groups and styles with a small but devoted coterie of Lisbon musicians: “My first improvisation group was an acoustic trio with Carlos Bechegas on reeds and Jorge Valente on piano. It was close to AACM aesthetics and I was very influenced by Leroy Jenkins; then came a trio with Bechegas and the singer Ines Martins and later a trio called Fromage Digital with José Oliveira on percussion and Valente on synth.” The fourth formation, a trio with Bechegas and Oliveira called IK*Zs, was the first to record, in 1995, appearing on Bechegas’ Projects (LeoLab). Rodrigues’ next appearance on CD was a duo with Valente released in 1999 as Self Eater and Drinker. Like many before him, Rodrigues bridled at the few opportunities to record. 2000 was the turning point, “Before 2000, there were a few people working but production costs were too high for CD release.”

It was then that Creative Sources began to take shape. In 1999 he recorded a series of improvisations called Multiples with his 11-year old son Guilherme playing cello and Oliveira playing percussion and acoustic guitar. Dedicated to the late John Stevens, Multiples documents Rodrigues’ interest in English- style free improvisation just before a significant shift in his work. When he couldn’t find a label to release it, it became the motivating factor in the birth of Creative Sources and its first CD.

A glance at the early releases suggests a modest intent: the first three discs all feature Rodrigues and Oliveira with a third player. While the CDs trace a sharp creative arc, it’s a modest effort to document closely the work of Rodrigues and his immediate associates: “I was concerned with documentation and possible self-promotion, but it was an ancient and powerful dream of mine to have a music label...”

From the start, the label had a distinctive visual identity, with the electronic musician Carlos Santos providing striking covers that often transform quotidian reality, words and shapes bending as if plastic. According to Rodrigues, “My relationship with Carlos has been going on for a long time and he works as a graphic designer. There’s a close proximity in aesthetics whether it’s label imagery or as a musical partner. I think he’s the perfect partner.”

The label soon expanded, welcoming musicians from around Europe, before moving on to Asia, America and the Middle East (there’s a special Lebanon connection). The first steps were small ones. The sixth release, Ura, recorded Alfredo Costa Monteiro, a Portuguese accordionist living in Barcelona, “but it really took off on the ninth production [No Furniture] with the Berlin trio with Axel Dörner and from there...it’s a small world. Musicians start to identify themselves with the label and then somehow it exploded. People from everywhere shared the same aesthetics.”

The aesthetic is clearly free improvisation, but it ranges from free jazz to the micro-explorations of English free improvisation, minimalism and EAI (electro-acoustic improvisation) that consistently blurs the identity of its sound sources. As the label rapidly expanded, its catalogue became a travelogue of international improvisation as well as an intimate family history of a small group of improvisers. It’s those two facets that give Creative Sources its special identity.

Rodrigues and Guilherme have traveled both literally and figuratively encountering different styles of improvisers at home and abroad. Among the highlights of their own recordings are Poetics, where they join the 18 members of the Glasgow Improvisers Orchestra; On Twrf Neus Ciglau, they’re at home in Lisbon to play with Carlos Santos and two very special guests, Welsh harpist Rhodri Davies and French soprano saxophonist Stéphane Rives. Another Lisbon recording, The Construction of Fear, has Rodrigues and Guilherme in free jazz terrain with the Brazilian tenor saxophonist Alipio C. Neto, Texas trumpeter Dennis Gonzalez and London drummer Mark Sanders. Perhaps Rodrigues’ greatest achievement is Stills, an ambitious recording that marked the label’s 100th release. It’s a three-CD set by the Variable Geometry Orchestra, a large ensemble of Lisbon improvisers: “It all started in 2000, bit by bit. I had a dream from my youth of having something similar to JCOA and Globe Unity Orchestra. It’s the first and only orchestra of this kind in Portugal and the triple CD is the necessary document.”

Trumpeter Nate Wooley is one of the American musicians who has appeared in the Creative Sources fold, releasing his first solo CD, Wrong Shape To Be a Story Teller in 2005 and a duo with guitarist Chris Forsyth, The Duchess of Oysterville, in 2007. For Wooley the label has been both an outlet and a source for otherwise unavailable music: Wooley is quick to point out Creative Sources’ track record with trumpeters, citing figures from the veteran Portuguese Sei Miguel to Argentinian Leonel Kaplan and the young Chicagoan Jacob Wick: “These are three players that are finally starting to get some recognition, but I still think some of their most interesting works were these early experiments that Ernesto took a chance on.” You can add Peter Evans and three intrepid Europeans: Axel Dörner, Franz Hautzinger and Birgit Ulher.

Gino Robair remarks, “I like the fact that Creative Sources lets the artist have total say over the details of a release, which isn’t always the case.” That’s likely why the Creative Sources catalogue includes some of the world’s most accomplished improvisers, like Backchats by Speakeasy, a group that pairs the singers Phil Minton and Ute Wasserman. There’s also the first session by Tom Djll’s Oakland project Grosse Abfahrt, called Erstes Luftschiff Zu Kalifornien. The catalogue includes other first-rank improvisers like reed players Xavier Charles, Bertrand Denzler, Jean-Luc Guionnet, Stefan Keune and Martin Kuchen and the guitarists David Stackenäs and Hans Tammen.

Rodrigues shows no signs of letting up. In the works are a recording by Swiss saxophonist Urs Leimgruber’s trio and Rodrigues’ own Suspensão, “an EAI octet dealing with silence, space and textures.” As with previous Creative Sources projects, they promise to be deeply personal adventures in fresh terrain. Stuart Broomer (AllAboutJazz-NewYork)